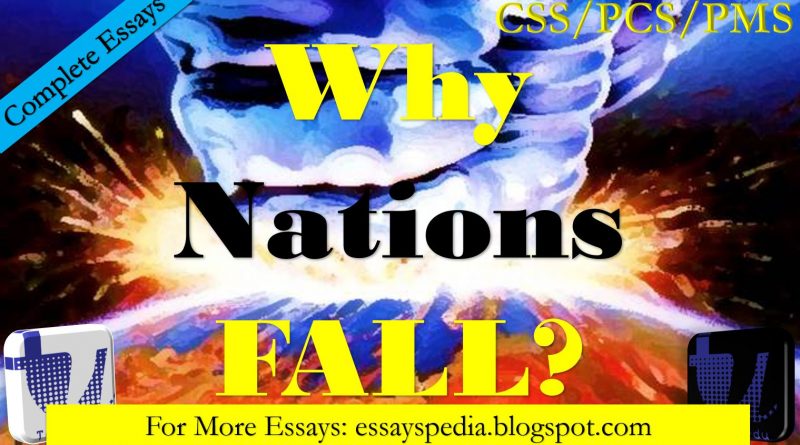 Essays for Competative Examinations English Precis & Composition Islamic Studies Optional Subjects PSC/CSS
November 16, 2018 Naeem Javid 0 Comments Aad, and Canaan - Criminal Nations, Moral Corruption - The main cause of the downfall, Samud, Sodom, The jurm of Aad and their downfall, The Three Attributes and Forces of Ajal, The Zulm of Pharoah and its downfall, Why Nations Fall?, Why Nations Fall? The Holy Quran Elaborates
Spread the love
1
1
Share

“And We had already destroyed generations before you when they wronged, and their messengers had come to them with clear proofs, but they were not to believe. Thus do We recompense the criminal people”. – Holy Quran (10:13)

The moral corruption of a nation causes its downfall. This is the simple historical observation that is derived from religious texts. The Quran testifies that no amount of material wealth, economic power and military might save a morally corrupt nation from self-destruction.

In this context, there are examples from the past of mighty nations and communities that have collapsed. The story of Aad, Samud, and Sodom is in the Quran as is the story of the Tribe of Israel and their killing by the pharaoh.

In Surah Yunus, 10:49, Allah says, “For every nation is a [specified] term. When their time has come, then they will not remain behind an hour, nor will they precede [it].” When ajal (death) of a nation is pronounced, then there is no refuge.

When a nation and its ruling elite become zalim, the countdown begins.

The Arabic root of the word ‘zalim’ is ‘zulm’ which means darkness. A kind of social darkness is perpetuated through injustice and coercion. Tyranny as a norm in the social system means that a nation is a ‘dark nation’. Injustice and oppression cause the decline of unjust nations. The downfall becomes inevitable.

Resistance to tyranny can be internal or external. The Quran offers the example of ancient Egypt under the Pharoah. Powerful Egyptians enslaved the tribe of Israel. They plundered their wealth and resources and resorted to all sorts of injustice.

The one notable tyranny unleashed by the Egyptians on the Tribe of Israel was a massacre. They exterminated their males and kept their females to serve them as slaves.

God inspired Hazrat Musa to challenge the mighty Pharaoh and his tyrant nation. According to the Quran, Musa was afraid but acted upon the Divine command. He was triumphant in liberating his nation from the unjust and tyrannical rule of the corrupt Egyptian elite.

The second attribute of the decadent nation is that they become mujrim. In the Quran (10:13), Allah says, “And We had already destroyed generations before you when they wronged, and their messengers had come to them with clear proofs, but they were not to believe. Thus do We recompense the criminal people”.

Criminal nations refuse to accept the Divine invitation to believe and uphold the truth. By rejecting Divine knowledge, these nations establish a false worldview.

The Quran mentions the people of Aad, Samud, Sodom and Canaan, and several other powerful and wealthy nations who became extinct due to their falsehoods. These nations suffered from different moral and social evils.

The Aad were a very strong nation. The Quran describes them as physically strong and tall. They developed methods of building carved houses in the mountains. Technology and physical control made them arrogant and disobedient to Divine laws. Their cities were obliterated by a sandstorm which lasted for seven days and eight consecutive nights.

Allah invites us to ponder over the fact that these nations cannot be traced today and one cannot sense that prosperous and powerful cities existed where ruin and wretchedness now prevail.

Pomp, prosperity, technology, and power cannot ensure the continued survival of nations and empires. Rather, obedience to moral law and the truth delivers people from suffering.

The third attribute of a decadent nation is that they become fasiq. That means simply that they disobey and ridicule the boundaries of Divine laws.

This disobedience is most pronounced in the affluent and wealthy class of a nation. This class indulges in all sorts of social, moral and psychological sins.

They indulge in all sorts of social, moral and economic crimes with fellow members of their societies. They indulge in moral and sexual perversion. They plunder the resources of the poor. They flout the law and justice. They ‘buy’ judges and get judgments of their own choice written.

In Surah Isra, 17:16, Allah describes the state of affairs of such corrupt classes. Allah says, “And when We intend to destroy a city, We command its affluent but they defiantly disobey therein; so the word comes into effect upon it, and We destroy it with [complete] destruction.”

According to the Quran, cities and nations run by a corrupt and sinful affluent class are destined to perish. No force of skill can prevent their eventual doom.

The wealthy and affluent class ridicule and disobey Divine boundaries and the legal limits prescribed by Allah’s prophets, hence inviting both natural and historical disaster.

History bears testimony to the moral, economic and social corruption of the affluent classes. It is recorded by historians that empire after empire and nation after nation has fallen because of their sexual perversion, ethical decay, social and political injustices.

The writer is a cultural psychoanalyst.

Environmental Governance – The Case of Pakistan | Complete Essay with Outline