Warning: mysqli_num_fields() expects parameter 1 to be mysqli_result, bool given in /home/techurdu/public_html/wp-includes/wp-db.php on line 3547
 These Are 4 Simple Tips To Complete Domain Of Heresy In Genshin Impact - Tech Urdu
Skip to content 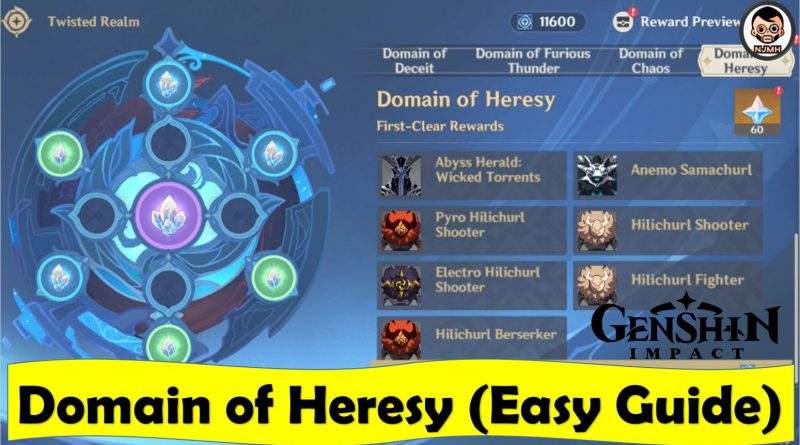 The Domain of Heresy (Twisted Realm)

The Domain of Heresy: One last challenge stands in your way in Genshin Impact‘s Twisted Realm. This bout involves a familiar elite enemy that you’ve fought before, the Abyss Herald: Wicked Torrents. However, since this is part of the Energy Amplifier Initiation event, there are modifiers that could prove to be a little problematic. Here’s our Genshin Impact guide to help you with the Twisted Realm’s Domain of Heresy enemies, as well as a few tips regarding the modifiers, score, and crystals.

How to Complete Domain of Heresy?

The Abyss Herald: Wicked Torrents is the same elite that you encountered during Genshin Impact‘s “We Will Be Reunited” archon quest. The difference this time around is the Ley Line Disorder that allows the boss to spawn attendants. Think of these hilichurls as similar to those that you spotted in the Frost-Worn Space domain a couple of days ago. Now the thing is while they’re alive, they’ll provide continuously resistance buffs and periodic healing to the Abyss Herald which make this domain difficult and tricky.

Each Attendant increases the Elemental RES and Physical RES of the Abyss Herald: Wicked Torrents, and will also heal it every 12s. The more Attendants there are on the field, the stronger the enhancements and healing abilities.

The Abyss Herald still has the same attacks as before, only they now hurt a lot more as it is level 90. It has several attacks of its own, all of which shouldn’t be too hard to dodge, though it does have a nasty attack where it spins in the air vertically and slashes with its blades.

The boss tends to summon around four attendants every 30 seconds, so you better be ready to take them out. Once its health is down to a sliver, it switches to its Dark Descent phase (i.e., water shield) and it won’t spawn attendants anymore.

Tip 1 – To take out the Abyss Herald’s attendants, you’ll want to initiate crowd control skills and AoE techniques (using Anemo character if you have) to gather them all together, and annihilate them quickly.

Tip 2 – Continue peppering the Abyss Herald until its health is depleted. Once it switches to the Dark Descent/water shield phase, the encounter becomes significantly easier. For one thing, you wouldn’t need to deal with attendants anymore. Moreover, due to turning into a Hydro entity, you can perma-freeze the Abyss Herald consistently.

Tip 3 – Make sure to use elements that can counter Hydro (i.e., Cryo and Electro – Lisa and Kaeya), and you should be able to defeat the boss.

Tip 4 – Throughout the Energy Amplifier Initiation event, there are crystals that you can equip to make this fight a bit easier. Timely Rain is incredibly helpful for giving you another option for freezing your opponents. This will be the main tactic of this fight. You can also use Ironbow and Frostbite to amplify your Cryo DPS’ damage output. The rest are optional, so feel free to experiment to see what combos work best with your party and share your thoughts in the comments section below.

Remember we need to get a total score of 20,000 to get all the reward and here the good news is that you won’t even need to select most of the modifiers or buffs. If you were able to obtain roughly 5,000 or more points in previous Twisted Realm challenges, then there’s a good chance that you’re close to the 20,000-point threshold. This is the highest threshold where rewards are given out.

(Easy Guide) The Domain of Heresy – How to Defeat the Abyss Herald in Twisted Realm? | Genshin Impact