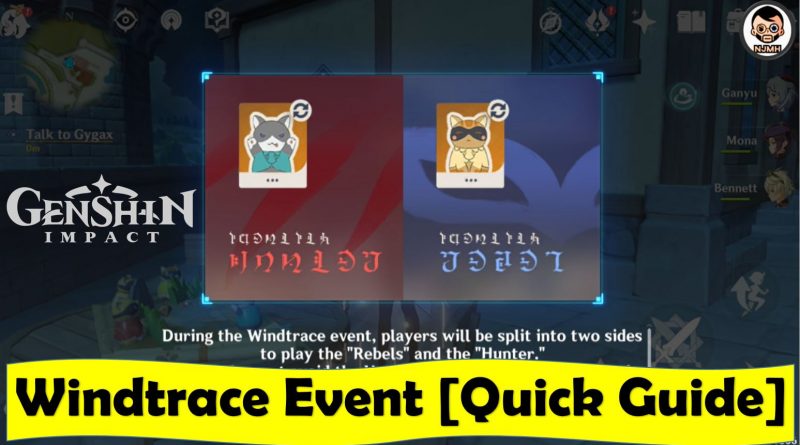 In Windtrace Event, Here, Players will be split into two sides — the Rebels, members of the ancient resistance, and a Hunter sent by the ancient aristocracy. During the event period, travelers can take part in a game of Windtrace at Gygax’s, and obtain Windtrace Coins.

Who can play Windtrace Event?

How to Play Windtrace Event?

How to play Windtrace Event as Rebels?

How to play Windtrace Event as Hunter?

When you participate in Windtrace, a Contested Zone, out of 5 different areas, will be randomly chosen from among the areas that have already been unlocked. Each zone provides a new challenge, helping you find and learn new ways to hide from other players!

On the first day of the event, the maximum number of Windtrace Coins you can carry is 1,200. This amount will increase by 600 for each of the 6 days after that, up to a maximum of 4,800 Windtrace Coins. Use the matching function to find randomized games and obtain Windtrace Coins.

When forming a custom Co-Op party to play this game or when your Windtrace Coins have reached the current maximum, you will not obtain any Windtrace Coins.

Players can either have custom matches with their friends in Co Op or play with random people. Keep in mind that only randomized matches with reward you with Windtrace Coins though.

A match will have one player as the Hunter and have the rest be Rebels. The Hunter wins if they capture all Rebels within the time limit. That being said, the Rebel team wins as long as they aren’t all caught!

During the event, your combat abilities will be replaced by Windward Arts depending on your role and which Windwart Art you equip. You can equip Windward Arts in the Windtrace event menu as well as the match lobby.

See Also: These are 4 Simple Tips to Complete Domain of Heresy in Genshin Impact

In this video, I will not hide myself to get Windtrace Challenge Reward “Win the game once as a Rebel without using Disguise“.