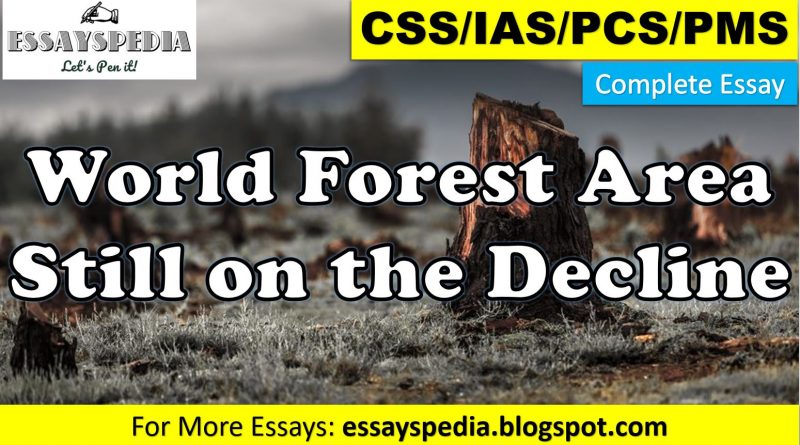 According to data from the U.N. Food and Agriculture Organization, deforestation was at its highest rate in the 1990s, when each year the world lost on average 16 million hectares of forest—roughly the size of the state of Michigan.

At the same time, forest area expanded in some places, either through planting or natural processes, bringing the global net loss of forest to 8.3 million hectares per year.

In the first decade of this century, the rate of deforestation was slightly lower, but still, a disturbingly high 13 million hectares were destroyed annually.

As forest expansion remained stable, the global net forest loss between 2000 and 2010 was 5.2 million hectares per year.

Global rates of deforestation do not capture the full damage done to the world’s forests. Forest degradation from selective logging, road construction, climate change, and other means compromises the health of remaining forests.

Each year the world has a less forested area, and the forests that remain are of lower quality. For example, replacing natural old-growth forests with a monoculture of an exotic species greatly reduces biodiversity.

Planted forests now cover some 264 million hectares, comprising nearly 7 per cent of total forest area. Plantations now have the potential to produce an estimated 1.2 billion cubic meters of industrial wood each year, about two-thirds of current global wood production. Where forests have already been cleared, plantations can alleviate the pressure on standing forests.

Forests are primarily threatened by land clearing for agriculture and pasture and by harvesting wood for fuel or industrial uses.

In Brazil—which has lost 55 million hectares since 1990, an area three fourths the size of Texas—land clearing for farms and ranches is the big driver.

Home to the Amazon rainforest, Brazil contains 13 per cent of the world’s forested area, second only to Russia’s 20 per cent. Between 2000 and 2010, Brazil lost 2.6 million hectares of forest each year, more than any other country.

Brazil is trying to reduce deforestation rates 80 per cent from the 1996–2005 average by 2020 and has in fact seen a large drop in deforestation in recent years.

But rising beef, corn, and soybean prices are likely to pressure the government to weaken its forest protection, further threatening the world’s largest rainforest.

Two other South American countries, Bolivia and Venezuela, have also felled large areas of trees, making South America the region with the largest forest loss between 2000 and 2010.  The continent lost 40 million hectares of forest during that period.

Africa also suffers from extensive deforestation, having lost 34 million hectares from 2000 to 2010. Firewood harvesting and charcoal production are important drivers.

Four sub-Saharan nations—Nigeria, Tanzania, Zimbabwe, and the Democratic Republic of the Congo—each cleared more than 300,000 hectares per year.

In contrast to South America, Asia has changed its trajectory from net forest loss in the 1990s to net forest expansion in the following decade, with China leading the growth in planted forests.

After disastrous flooding in 1998, China realized the tremendous flood control and soil protection benefits of intact forests, leading it to ban logging in key river basins and to begin planting trees at a rapid rate.

China’s heavy planting can disguise the trends elsewhere in the region, however. As the world’s largest processor of wood products, China imports both legally and illegally logged timber, driving deforestation in other countries.

Indonesia, where 82 per cent of the land area was covered by lush forests in the 1960s, has been a prime target. Today less than half of that country is forested, with some 24 million hectares of forest lost between 1990 and 2010. The good news is that the deforestation rate of 1.9 million hectares per year in the 1990s fell to 500,000 hectares per year during the most recent decade.

Mexico is another country where the government is taking on deforestation. In the 1990s Mexico had the seventh-highest rate of deforestation in the world.

Another large driver of deforestation in Indonesia is palm oil production; the country accounts for almost half of the global output of this product.

Expansion of oil palm, which is largely planted on lands that have been logged or burned, threatens the remaining forests.

To assess this risk and limit the country’s contribution to global warming from land-use change, Indonesia instituted a two-year moratorium in May 2011 on new licenses to convert primary forests to oil palm or other uses.

The temporary ban is meant to provide time for the government to devise a way to double palm oil production by 2020 from 2009 levels while protecting its forests. The effectiveness of this ban remains to be seen, considering the ambitiousness of the production goal and the government’s ongoing struggle to limit illegal logging.

Across the globe, Australia moved in the opposite direction, switching from a net forest gain in the 1990s to a net forest loss in the following decade.

Australia’s persistent drought from 2002 to 2010 was double trouble for its forests: the drought restricted forest regrowth while simultaneously increasing fire risk.

Wildfires, stoked by extended drought and high temperatures, burned millions of hectares of forest in Australia. Just one mega-fire on February 7, 2009, now known as “Black Saturday,” burned over 400,000 hectares—an area the size of the state of Rhode Island.

Wildfires, in conjunction with insect outbreaks, have also altered Canada’s forests. Around the turn of the twenty-first century, these disturbances released large amounts of carbon to the atmosphere, possibly transforming Canada’s boreal forests from a carbon sink, pulling carbon dioxide from the air and storing it, to a carbon source.

Carbon dioxide traps heat within the earth’s atmosphere, so whether Canada’s 310 million hectares of forest—the third most of any country—is a carbon source or sink can have large implications for future climate change.

The United States added a net 7.7 million hectares of trees between 1990 and 2010, around 380,000 hectares per year. Although the United States has experienced impressive forest regeneration within its own borders, it still contributes to deforestation as an importer of forest products—some $20 billion worth in 2011.

The United States added a net 7.7 million hectares of trees between 1990 and 2010, around 380,000 hectares per year. Although the United States has experienced impressive forest regeneration within its own borders, it still contributes to deforestation as an importer of forest products

The case in Europe is similar, where 2011 imports of forest products totalled $110 billion. Led by Spain, Italy, France, Norway, and Sweden, this region added a net 16 million hectares of the forested area from 1990 to 2010.

The current estimate of gross deforestation in India is quite low (–0.43%) for 2009–2011 compared to the global average of –0.6%. Even though considerable progress has been made in the protection of forests, gross deforestation rate continues as a focal hindrance.

Deforestation in India is the widespread destruction of major forests in India. It is mainly caused by environmental degradation by stakeholders such as farmers, ranchers, loggers and plantation corporations.

The loss of forest cover influences the climate and contributes to a loss of biodiversity. Adverse effects are siltation, flooding, soil degradation and reduced timber supplies, which then hampers economic situation.

Presently, Pakistan serving as a forest-poor country. The Worldwide recommended level for forests is 20-25 per cent of land area whereas in Pakistan only about 4.34 million ha (4.8 per cent including IPs) of its total land area is under forests, out of which 3.44 million ha are state-owned; tree cover on farmlands and private forests is 0.781 million ha (0.887 per cent).

The country’s deforestation rate has been estimated between 0.2 and 0.5 per cent per annum – the highest in the world – accounting for four to six per cent decline in its wood biomass per annum. The natural forest cover had reduced from 3.59 million hectares to 3.32m hectares at an average rate of 27,000 hectares annually.

Not all trees, nor all forests, are alike. Trees added in industrial countries in temperate zones, with different ecological attributes, cannot replace the bounty of biodiversity lost in tropical forests of developing countries. Global forest protection is a global effort.

Protection requires more than labelling an area of forest as off-limits to logging. By reducing consumption of paper and wood products, recycling paper, reclaiming wood, legally sourcing wood from sustainable plantations, finding substitutes for firewood, and stabilizing population by accelerating the shift to smaller families, our generation can help protect forests for future ones.