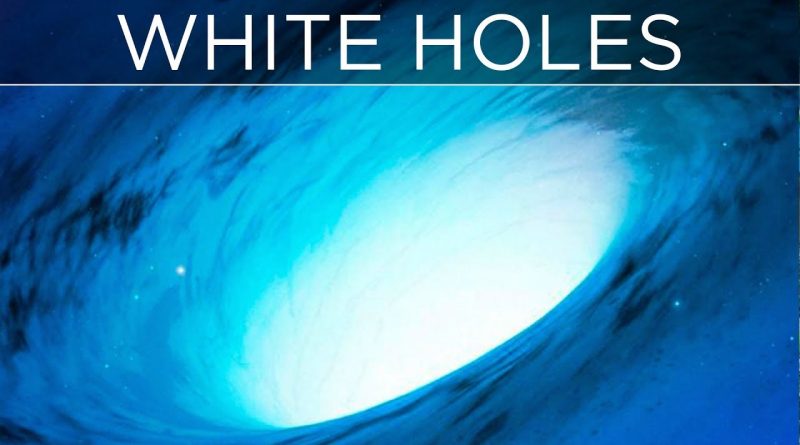 Black holes might easily be the most compelling mysteries in the Universe. Thought to be the collapsed cores of dead stars, these strange objects are well known for one particular property – matter goes in; nothing comes out.

Black holes are so dense that nothing can escape their event horizon. But they’re not the only type of ‘hole’ out there in space.

The Concept of the White Holes can be well understood with this example.

Let’s say you’re tinkering around with numbers exploring the space-time around a black hole, and you subtract that collapsed star – all the actual matter and mass – from your calculations. What the remaining maths describes is something called a white hole – a massless singularity.

As the name implies, a white hole is the opposite of a black hole. And astrophysicists have been playing with the concept since the 1970s.

You can’t escape a black hole. You can’t go into a white one. So, where a black hole is sucking matter in, a white hole is spewing it out. They would be incredibly bright and incredibly energetic, hurling radiation into space at a furious rate.

Hypothetically, it would be like hitting a ‘rewind’ button on a black hole.

According to Erik Curiel writing for The Stanford Encyclopedia of Philosophy: “Because the field equations of general relativity do not pick out a preferred direction of time, if the formation of a black hole is allowed by the laws of spacetime and gravity, then those laws also permit white holes.”

We have never, to our knowledge, actually observed a white hole. Physicists think they’re not likely able to exist in the Universe, and there are several reasons for this.

One big question is, how would they form? We have plausible models for how black holes form, but it’s not as if we can actually rewind time in the Universe to turn them into white holes.

You’d have to start with the singularity and go backwards, the object vomiting up matter until… pop! it assembles itself into a star. That would require a decrease in entropy, which would violate the second law of thermodynamics.

Starting with the singularity is in itself a problem, too.

“The only way to set up the singularity in the real Universe is to start with it being there. Somehow the Universe has to form with ready-made singularities,” explained astrophysicist Karen Masters.

“There is no reason to suggest that the Universe started out with ready-made singularities. It would actually be quite odd if it did.”

But let’s ignore all that for a second, and assume that a white hole did somehow pop into existence. According to the maths, there can be no matter within the space-time that includes a black hole. As soon as matter enters that region, no matter how miniscule a speck, it can no longer include a white hole.

So if a white hole has ever existed, it probably ceased to exist pretty quickly. If the Universe had white holes from the outset, they would have been snuffed out billions of years before life on Earth was starting to wriggle in the depths of the primal ocean.

But, while white holes are purely theoretical at this stage, so too were black holes once upon a time, and fairly recently, too.

In fact, there is a type of event scientists have put forth as a candidate white hole, and that’s a gamma ray burst. These are some of the brightest and most energetic events in the Universe, emitting more energy in 10 seconds than the Sun can in 10 billion years.

They’re accompanied by an afterglow that indicates they’re created by stellar explosions, and in 2017, astronomers saw one actually occurring, caused by the now-famous collision between two neutron stars, GW170817.

But in 2011, two astrophysicists proposed that a gamma ray burst with unusual properties may have been a white hole.

NASA astronomers thought it was likely a black hole in the process of forming. The odds of it actually being a white hole are probably pretty low.

And then there’s the seemingly wild idea that the Big Bang was itself a supermassive white hole. This concept has also been explored mathematically – but again, it’s highly theoretical stuff.

In fact, the term ‘Big Bang’ might be somewhat misleading in this regard. According to the current mainstream theory, the Universe didn’t explode into existence from a single point – it inflated into existence, and spent 500 million years or so in darkness, not really expanding much before the intergalactic medium ionised, and the lights switched on. That’s not hugely consistent with a white hole model.

But there’s more. There is a hypothesis that a white hole is what a black hole turns into at the end of its lifespan.

Black holes seem pretty long-lived, so it’s possible the Universe hasn’t been around long enough for that evolution to have taken place. Or it has, and the white holes wink out of existence before we see them.

Or it has, but it’s only tiny, primordial black holes that have turned into tiny white holes, which now constitute a component of dark matter.

These are all mathematical possibilities, but in the real Universe we’re actually living in, not the realm of pure mathematics, we’ve still never seen one.

If we ever do, that means we’re going to have to seriously rethink our understanding of the Universe.

Won’t that be exciting?