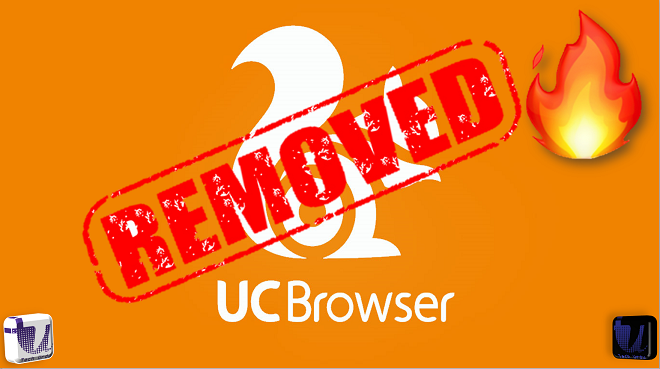 UC Browser is Back on the Play Store

After being booted from the Play Store due to a certain setting in the app that wasn’t in-line with Google’s Play Store policies, popular web-browser ‘UC Browser’ owned by Alibaba, is back on the Play Store now. 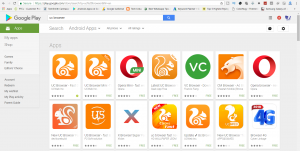 A week ago, when the browser was removed from the Play Store, there were assumptions that the browser had been removed due to using unhealthy and misleading practices to promote its app — an accusation that UC Web refuted, and said, “The reason for the removal has nothing to do with alleged data security breach or malicious promotion.”

According to StatCounter’s latest figures, the China-based browser has a market share of 45.08% in India, with Chrome tailing it with 35.19% share of the market, making UC Browser the most popular browser in the country.

UC Browser Will Return to the Play Store Next Week: UCWeb

UC Browser, owned by Alibaba, has disappeared from the Google Play store for allegedly promoting malicious redirect ads. However, according to a recent statement from its parent company, UCWeb, the app was removed because a certain portion was not in line with Google’s policy and it will be available for download sometime next week.

“The exact reason for UC Browser’s unavailability on Google Play is because of a certain set of UC Browser that was not in line with Google’s policy. The reason for the removal has nothing to do with alleged data security breach or malicious promotion”, a UCWeb spokesperson said.

UC Browser will be listed back on the Play Store next week, once the policy conflict has been addressed. Since the App is down in Google Play, still the official UCWeb site has provided a link to side-load the UC Browser app through its APK file, though.

UC Browser, owned by Alibaba, has disappeared from the Google Play store just weeks after the app topped 500 million downloads on Google’s mobile store. UC Browser a mobile browsing app had over 500 million downloads on the Google Play Store, is no longer available for download from the marketplace. While other UCWeb applications like UC Browser Mini etc are still in Google Play Store. Although there is no official statement from the company as to why the app was taken down.

It is being speculated that the malicious redirect ads served up by UC Web’s affiliates to inflate installs must have prompted Google to take action and remove the browser.

The removal was first spotted by users, particularly by the eagle-eyed netizens on Reddit, and reported late on Tuesday. A Reddit post by Android Police founder Artem Russakovskii also posted the text of an email that he received from UC Union (UCWeb’s affiliate network) that suggests some conflict between Google and UCWeb. The UC Union email, which was said to be circulated on November 9, warns partners to abandon “all misleading / malicious advertising” ways that are being used to procure new users. 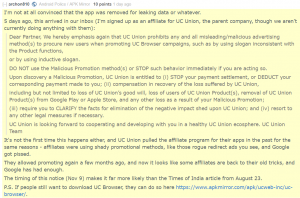 Email suggests that certain UC Web’s affiliates have been using illusory advertising to increase UC Browser downloads. Considering Google’s recent announcement that it is cracking down on this type of behaviour on Chrome, it wouldn’t be surprising to see it applying similar rules to Play Store links.

Mike Ross, who claims to work for UC Browser, tweeted that the browser is “temporarily removed” from the Play Store for 30 days due to adopting “misleading” and “unhealthy” methods of increasing installs. We’ve reached out to Google and UCWeb for clarity and will update this space accordingly. 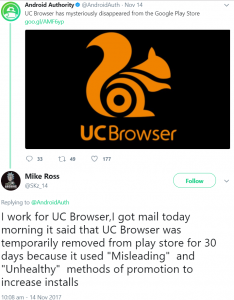 Couple of months ago (August 2017), some media reports revealed a probe against UC Browser for sending user details and location data to a remote servers. The government of India was even set to ban the browser if the Chinese browser was found guilty. However, UCWeb had released a statement ensuring security and privacy of users at its priority. “We have strong measures in place to encrypt the data while we transmit it,” the company had said in an interview to IANS.

Another report suggests that the app was taken down as it incorporates ad-blocking features, in built which was leading to a massive impact on Google’s core business. However, Google is itself planning to launch a version of Chrome with ad filtering.

Currently there is no evidence to either confirm or deny these suspicions. UCWeb has previously denied any wrongdoing, stating that it “will not do anything to breach the trust of our users” and that it takes “security and privacy very seriously.

“We were informed by Google Play about temporary removal of UC Browser from the Play Store for 7 days, beginning 13 Nov 2017, under the reason that a certain setting of UC Browser is not in line with Google’s policy. We have conducted an urgent internal investigation and fixed the problem. The new version has been uploaded on Google Play’s Developer Console and is awaiting evaluation. We will actively cooperate with Google Play for any concern caused by this unintentional error. In the meantime, users can still download UC Browser Mini from the Play Store, an alternative version of UC Browser.  We thank Google Play for their understanding and support extended to us. UC Browser new product package will be back on Google Play next week and, in the interim, users and partners can download the product from our website http://www.ucweb.com.”

At the moment, if you search for UC Browser on Google Play, it brings UC Browser Mini, which is the lightweight mobile browser by UCWeb.

How to Install UC Browser in Mobile Now?

Since the App is down in Google Play, still the official UCWeb site has provided a link to side-load the UC Browser app through its APK file, though. However, as of now, there is no evidence to support this speculation and both Google and UC are yet to comment on this issue. That said, a few report also claims that the ban is temporary.

UC Browser has an enormous base in India. It became India’s favorite mobile browser and at one point grasped over 50 percent market share. In addition, it is the sixth most downloaded Android app in India. UCWeb has also claimed that Indian users make up 100 million of its total monthly active users from around the world, with the latter figure reportedly reaching 420 million, per reports from 2016. As a result, its removal is a shocking step to say the least. It will also lead to a number of key questions, most notably: why was it removed after all this time and after so many downloads?

Here is the video explaining in detail the reasons why UC Browser got Banned. The video is in hindi/urdu yet with English Subtitles

One thought on “Why UC Browser has been Removed From the Google Play Store?”