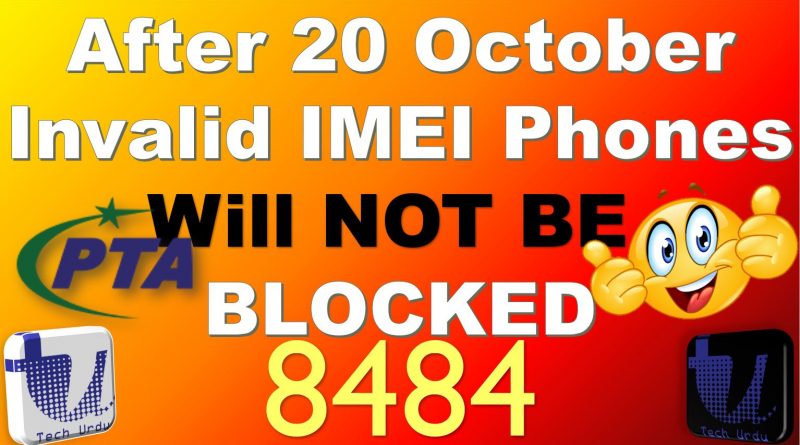 PTA Will NOT BLOCK Invalid IMEI Phones after 20 OCTOBER

As you already know that there was great hype over the matter. Well, There is an update in this matter that PTA will not Block Invalid/Non-Complaint IMEI Phones after 20th October.

Scroll Down for Video (in Urdu)

If you want to know the details please visit this post: PTA Launches System to Block Stolen, Smuggled Phones

According to a recent report of Propakistani PTA Stopped from Blocking Non-Compliant Phones After 20th October. As per the post, The Senate Standing Committee on Information Technology barred Pakistan Telecommunication Authority (PTA) from blocking non-compliant/invalid mobile phones.

The parliamentary panel sought a briefing from PTA regarding its decision to block un-registered IMEI mobile phones after October 20, while raising questions on non-action against dealers/importers, and delay in implementation of policy directives.

The committee also recommended for non-blocking of un-registered IMEI mobile phones even after October 20 which are currently working but proposed blocking of non-compliant/invalid mobile phones, new sale/purchase after the due date.

STC Reservations over the Blocking of IMEIs

The Committee asked PTA to consider the fact that not all of the 150 million mobile users can understand this message and do not have enough time to check the status of their phones or cannot afford to buy new phones altogether.

The committee also raised questions over DIRBS. They wanted to know how a system worth millions of rupees was procured and who sponsored it.

PTA Response over  the Reservations

PTA officials submitted that the move was taken as per the Telecom Policy, on which the committee objected that why the policy was not implemented earlier. Senator Mian Muhammad Ateeq Shaikh termed it a move against the PTI-led government.

(Video) PTA Will NOT BLOCK Invalid IMEI Phones after 20 OCTOBER