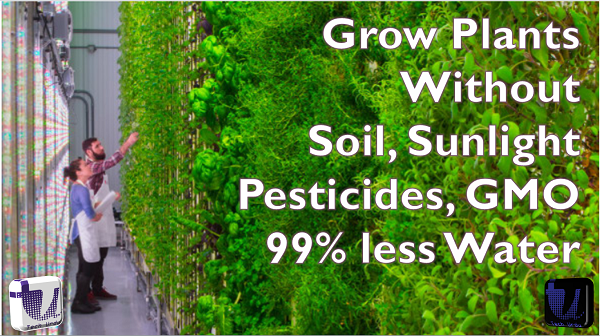 Amazon CEO, Jeff Bezos, is back at being the world’s richest person, thanks to his impeccable leadership which has made Amazon the most valuable e-commerce company. But he also seems to have interest in agriculture and has invested in an agro firm which grows plants in a unique way i.e, Grow Plants without Soil, Sunlight, Fertilizers and GMO.

Plenty, the agro-tech company backed by Jeff Bezos, has a 100,000 square-foot facility where plants, preferably  fruits and veggies, of “backyard quality” are produced for consumers in Seattle and Vancouver, B.C organically on LED-illuminated pillars through a technique called ‘indoor vertical farming’, which does not require soil, pesticides, and even sunlight.

How does this system work – Grow Plants without Soil, Sunlight, Fertilizers and GMO?

Plenty grows plants on LED-lit 20-foot-tall towers inside a former electronics distribution center which is a climate-controlled facility. It’s a type of agriculture in which food grows on hanging modules in a climate-controlled, indoor facility. The process allows certain types of produce to be grown year-round in small spaces.It does not use pesticides, herbicides, synthetic fertilizers, or Genetically Modified Organisms (GMO). The system uses thousands of infrared cameras and sensors to collect data in the farms, which is then analyzed using machine learning to optimize how plants grow.

In the past, vertical farming investments haven’t panned out — Local Garden Vancouver, a similar crop-yielding greenhouse concept, declared bankruptcy a few years ago and other startups in the space have struggled over the years.

The thing that makes Plenty system different from previous attempts that rather than growing horizontal plants stacked above each other, Plenty grows its crops vertically with the plants growing outward instead of up. Although the company hasn’t revealed much about its methods, Plenty says it plans to use machine learning and climate creation technology without having to genetically modify its seeds.

See Also: Do you know that using this Web Browser your every search equals Planting a Tree? Here is how you can use it.

Plenty said its technology can achieve yields of up to 350 times greater than traditional agriculture while using 1 percent of the water (cutting water usage 99%) and barely any land compared to conventional methods. Moreover, they said that they can also grow plants — up to 300 variants of produce — year-round, regardless of season, which helps increase efficiency.

Since such farms can be established at any desired place near cities, as these don’t require a land area for growing plants etc, therefore such proximity to cities also means that produce doesn’t sit in trucks for days or weeks before ultimately arriving on your kitchen.

As per the statement, fresh produce will start shipping to a few restaurants initially in mid-2018, and then to other buyers that will be announced at a later date. It also plans to open more farms across the country and eventually around the world.

Plenty aims to offer its organic produce at the same rate as those available in stores and plans to further bring the down the cost in future by automating the entire agricultural process.

The current activities will grow 4.5 million pounds of greens annually, which is enough to feed around 183,600 people.

Plenty cites studies showing that nutrition can be depleted up to 50 percent while produce is in transit. The company says its model of growing local and getting the produce to consumers within hours of harvesting results in the most nutrient-dense product possible.