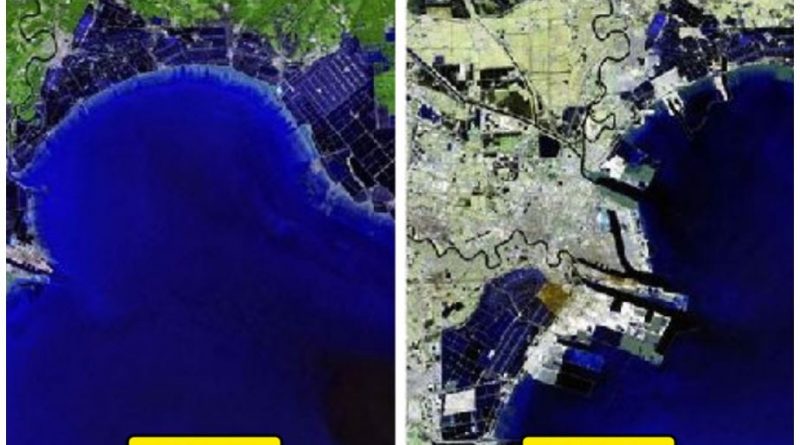 It sounds unbelievable, but a recent survey shows that the past 50 years of science and production progress pushed the world to a new geological epoch! Our Planet has Changed. As a rule, we underestimate humanity’s impact on the Earth’s atmosphere, oceans, and wildlife.

But do we notice changes in ourselves? Believe us, the last years were marked by various dramatic transformations that not only affected the planet but humanity as well.

Bright Side offers you to look through the many positive and negative changes that have taken place on Earth and in humanity for the past 50 years.

NASA “before and after” images devoted to the planet’s surface transformations: 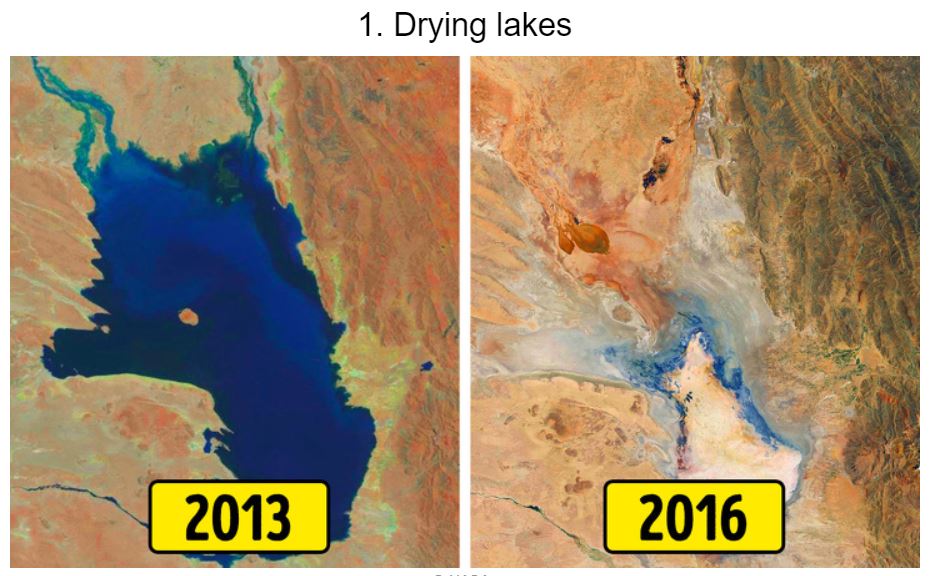 Poopó is Bolivia’s second-largest lake and has always been an important fishing resource for its local people. Now Poopó has essentially dried up because of mining and agriculture. It is interesting that this is not the first time that the lake has evaporated. The last time Poopó dried up in 1994, it took several years for water to return, and even longer for ecosystems to recover.

This is the popular Swiss ski resort, Matterhorn Mountain. Take a look at the amount of snow that remained there in August of 1960 (left) compared to August of 2005 (right).

Also Read: <a class=”jp-relatedposts-post-a” title=”How Many Robin Hoods Would it Take to Save the Planet Earth from Climate Change?

Bloomberg recently released its Robin Hood Index- a calculation of the cost of buying carbon credits to counterbalance harmful emissions and make an impact on Climate Change. However, unlike its namesake, the Robin Hood Index takes into account the wealth of the world’s top billionaires. Bloomberg’s Robin Hood Index calculated what cut share of…” href=”https://techurdu.net/robin-hoods-save-earth-climate-change/” rel=”nofollow” data-origin=”2878″ data-position=”2″>How Many Robin Hoods Would it Take to Save the Planet Earth from Climate Change? 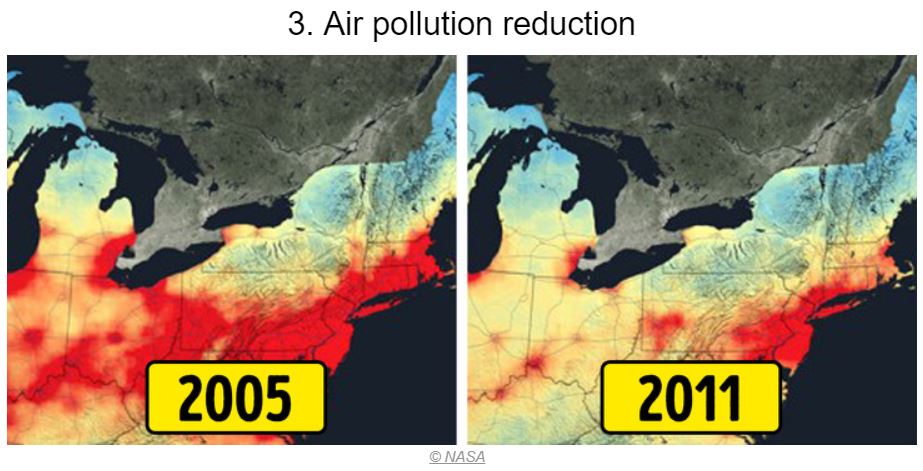 Not all the ways we’re transforming the Earth are negative. For example, satellite data from NASA revealed a great reduction in nitrogen dioxide pollution from cars and power plants in the United States between 2005 and 2011. Since 2005, the American government has implemented an environmental reform package and many electric utilities have shifted from coal to natural gas operation. 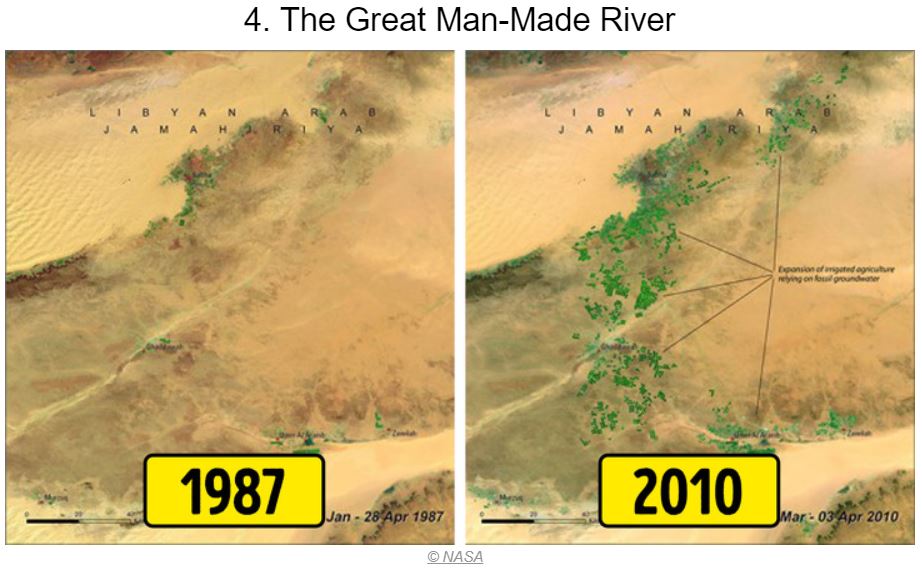 To expand farming in the region, the Libyan government developed the world’s largest irrigation project called the Great Man-Made River. These photos prove that the project has boosted agricultural growth in the region since 1983. 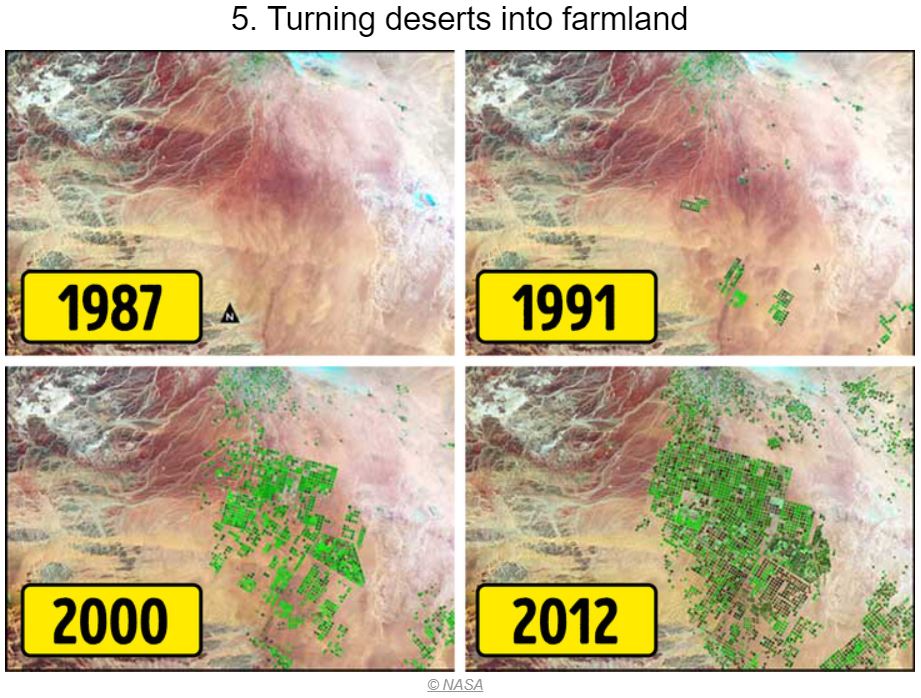 These photos of the Wadi As-Sirhan Basin in Saudi Arabia show the dramatic transformation the desert has undergone over the past 30 years. This region has been developed into a real farmland! Local government decided to tap water reserves up to a kilometer deep underground to allow farmers to grow fruits and vegetables in the desert. 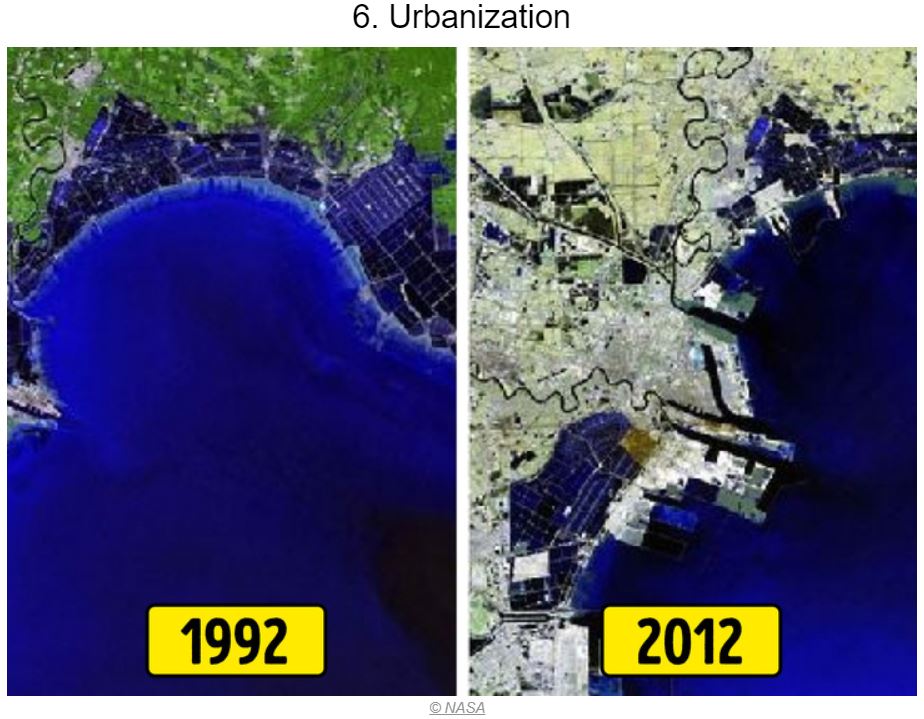 These images show the large-scale urbanization of the city of Binhai, China. Since 1990, Binhai has been transformed from a swampy region into a huge economic zone. Currently, it is a home to various aerospace, chemical, and other manufacturing companies. 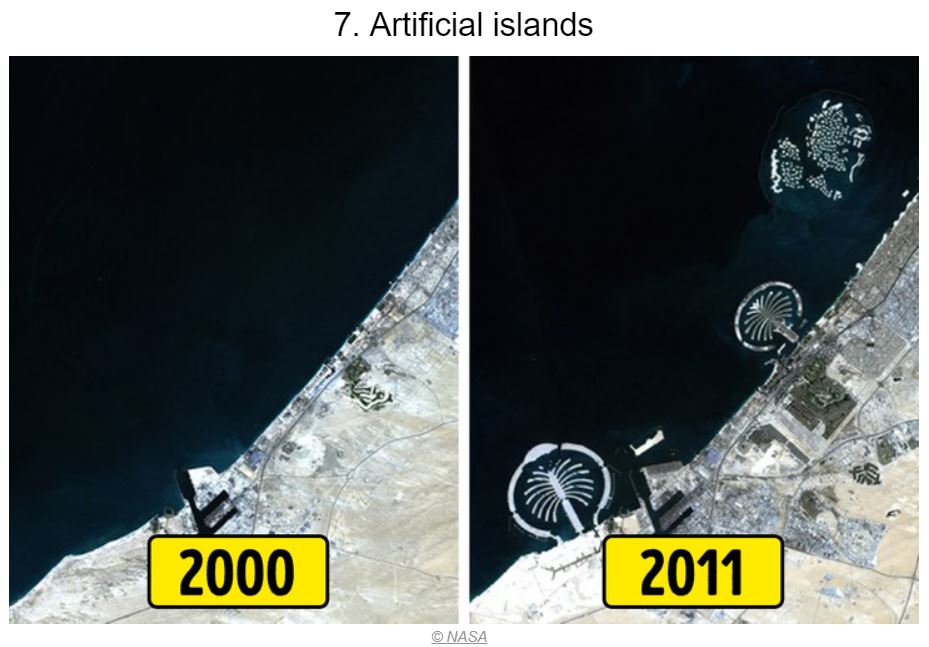 To promote beach tourism, the Dubai government built a huge number of artificial islands along the coast, 2.5 million-sq-ft in total. The most famous islands are shaped like palm trees. As the satellite photos above show, the growth of Dubai on land has been no less significant, with barren desert replaced by irrigated land and roads.