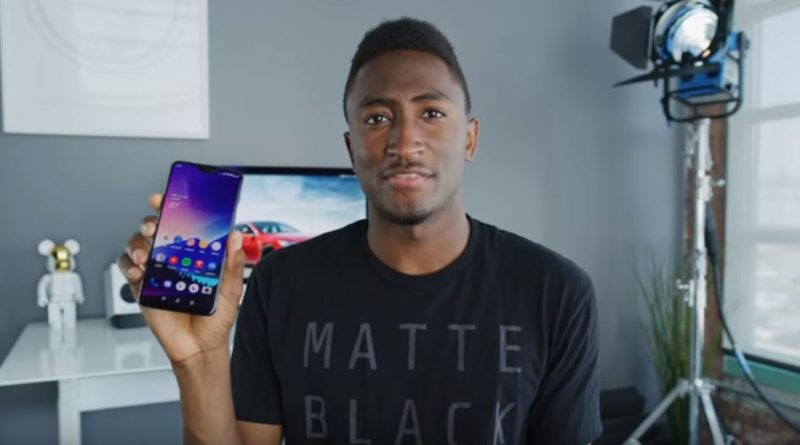 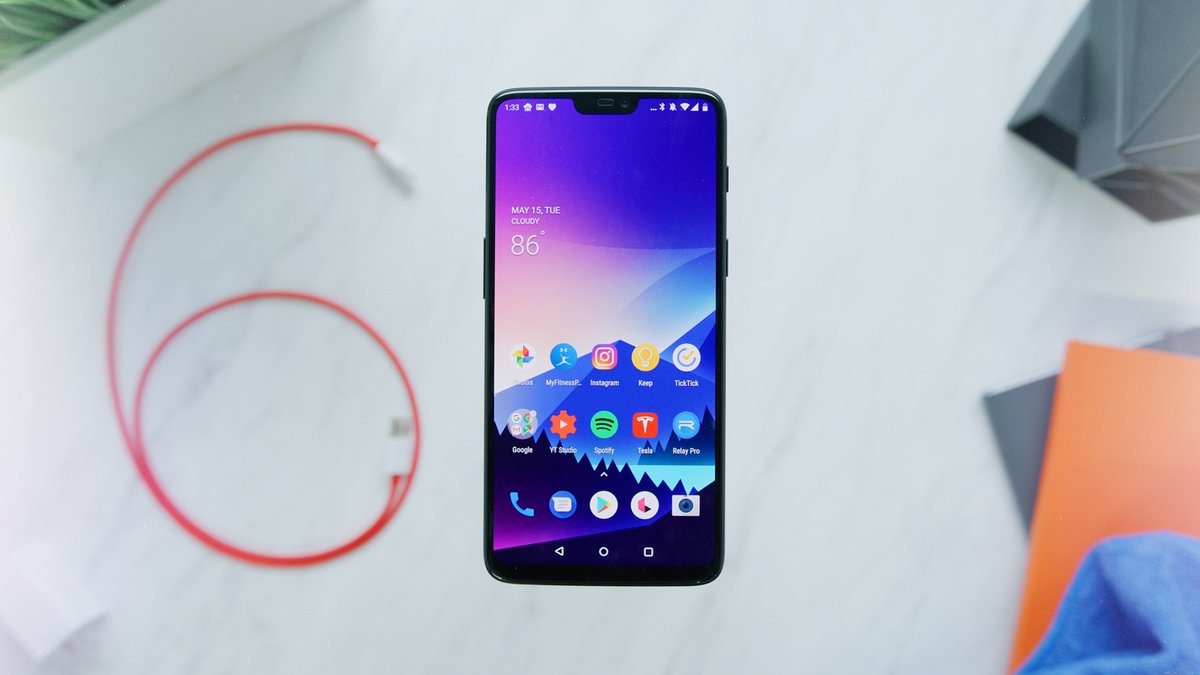 This is it this is the OnePlus 6. So it’s been interesting to follow OnePlus for the last couple of years all the way from the beginning of the OnePlus days till the flagship killer mentality that NEVER SETTLE and then look at how the trends move all the way until what they’ve developed into today 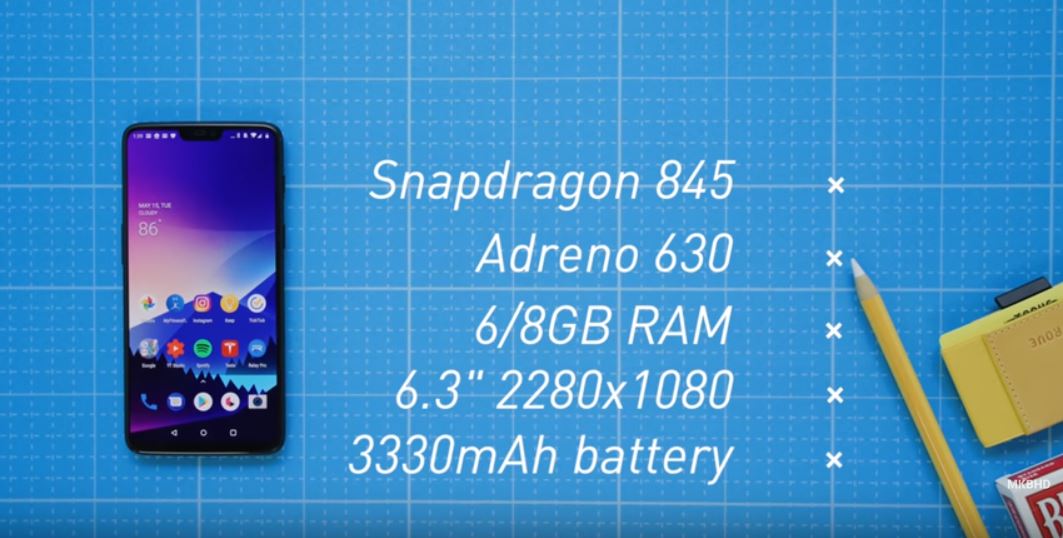 So again pretty classic oneplus. They’re sticking to their guns of delivering big numbers and impressive specs for a lower than expected price.

With all that here are my impressions. What a lot of people are gonna have the most strong reaction to, including me, is the new design of the OnePlus 6.

They just like everyone else this year have 2018ized their phone. It’s got dual cameras, glass back, big screen and a notch. 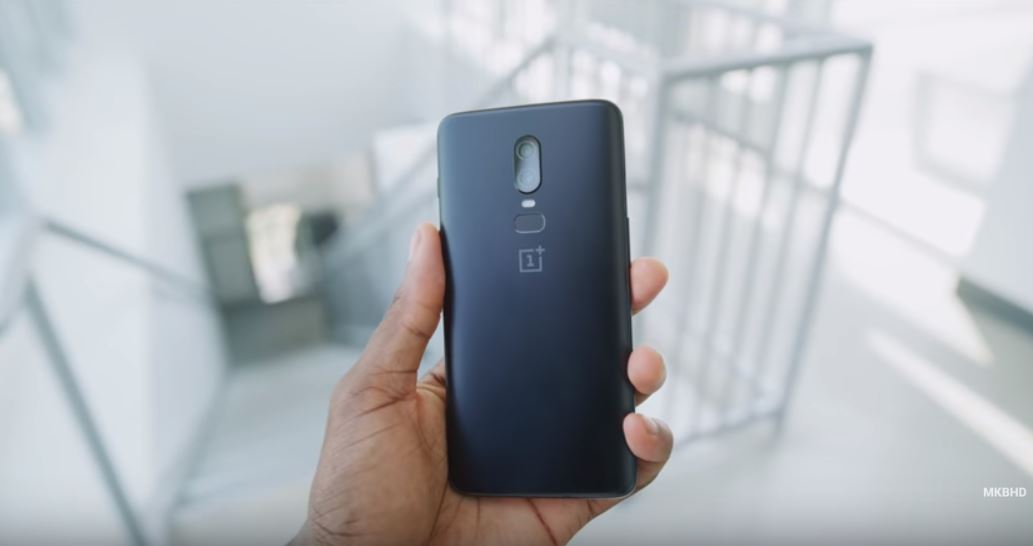 I mean that’s it that’s just like every phone we’ve seen in the last 6 months and probably every phone for the next six months. OnePlus joins that crew and this is what their version of it looks like. And honestly, I think it looks pretty good. I don’t know if it’s just that I’ve been getting used to notches and phones for the past few months or maybe that this one’s a little bit smaller. I don’t know what’s wrong with me but I think this phone overall looks pretty good.

The text and icons go right up to the edge in the corners. The bottom chin is pretty small. So it’s not bad. The glass back is a little more interesting. It’s got that signature one Plus curve to it so it’s the same shape as the rest of their phones adds a little weight though from being glass. No Wireless Charging – though that’s kind of a turn-off that’s just the first impression. 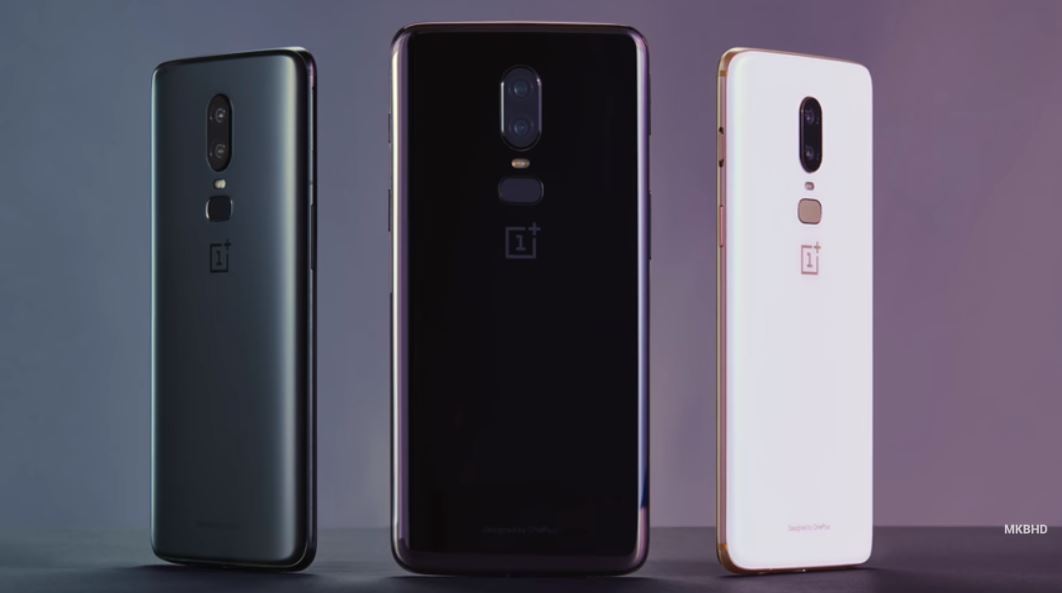 There’s actually three different glass back finishes a mirror glossy back that kind of looks like a ceramic, a soft white with this rose gold metal accent color and yes a matte black kinda. I mean it’s much more matte than glossy I’d say it has this kind of a sheen to it in certain lights it feels more like I describe it like a frosted black glass.

Continuing on the back the new fingerprint reader is in the same place but it’s a bit smaller so you might remember it was a circle on the back of the OnePlus 5T. I liked that this one has less surface area and sits right below the vertically oriented dual cameras that pretty much everyone is adopting now.

This dual camera setup is actually kind of interesting though usually you just kind of assume when you have dual cameras on the back of a phone. You got your main camera sensor and on the secondary ones usually your telephoto for portrait mode and 2x zoom things like that.

These two cameras are actually the same focal length. The primary camera is a Sony IMX 519, a 16-megapixel sensor with an F 1.7 aperture and OIS (Optically Image Stabilized). And then your secondary camera is a Sony AMX 376 K a 20-megapixel sensor again at F 1.7 and they don’t say whether it’s optically stabilized or not so I would guess it’s not.

So a secondary camera of the same focal length but a higher resolution for what? sharpness maybe? some detail stuff? I guess maybe portrait mode helped? I don’t really know exactly this is something we’re gonna have to test for the full review.

Around the front is really where it looks the newest with that huge new display the notch up top this is what people love talking about. To be fair is one of the smallest notches there’s just a camera some sensors and your earpiece up there. And then you end up with an 84% screen to body ratio.

This is the new design this is what we’re getting in 2018. It’s exactly what we expected. So okay we’ve got it. OnePlus has taken cues and hints from 2018 and other players and they’ve updated their smartphone but they’ve also actually taken things from what they’ve done well in the past and they’ve stuck to their guns on things like dash charging on things like oxygen OS. They kept the alert slider. They kept the headphone jack and they stuck with 1080p.

So OxygenOS really is great. You could barely call it a skin but it’s one of those few skins on top of Android 8.1 that doesn’t try to do too much. So it’s near stock. It’s always one of the first with software updates and it has a couple tweaks here and there to make things interesting.

They still have this shelf next to the launcher- cool. There’s a toggle to hide the top notch if you’re not super into that – that’s new to oxygen OS. This time they’ve also added gestures if you want to get rid of the buttons at the bottom and fully maximize your screen and do swiping instead. I don’t really like this as much it’s not quite as smooth as I would have liked or anywhere near something on an iPhone. That’s the reason I’m not using it all the time. But I think this can be improved with software updates.

They also tossed in some improvements to the gaming mode as well. There’s a dark mode theme which can do wonders with that AMOLED display. So yeah just a nice little suite of improvements over the mostly stock Android I’d say is my favorite way to go.

And on top of all of that it’s got really good I just really like these buttons there are really tactile clicky buttons probably one of the most underrated things about this. Bluetooth 5.0. Did I mention it keeps the headphone jack?

This thing checks a lot of boxes.

So basically these cameras and the battery life are the two things that need to be deeply tested. But I can tell you right now after I’ve used this phone for the past couple days and it is a really promising one – it’s fast – its smooth. It has a lot of the things well that I hope a phone does. Well, and it’s just those last couple things that we’ll see about. But for those you wondering, I will be doing a full review of the OnePlus 6. People were asking that; that’s definitely happening. But so far so good let me know what you think until the next one. Thanks for watching. Peace!

OnePlus 6 Unboxing – Is This The One? | Unbox Therapy