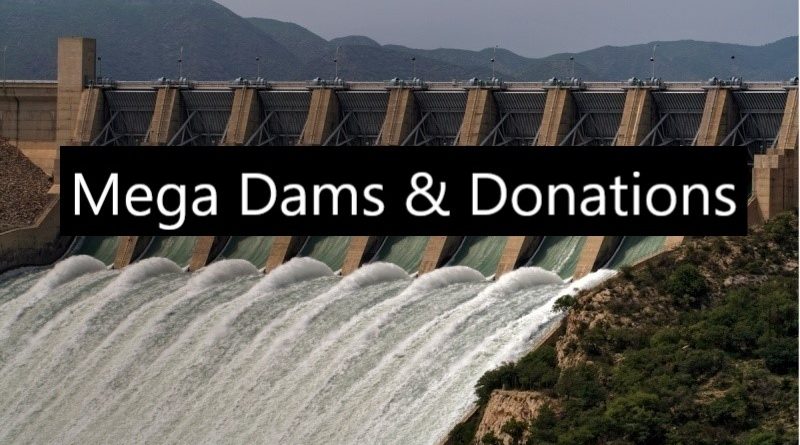 One can appreciate the chief justice of Pakistan’s sensitivity to the growing water crisis in Pakistan, but with all due respect, this is not how infrastructure finance is done. You do not crowd-source a mega dam. The fact that this even needs to be said is embarrassing, to say the least.

Just consider a few questions that arise when trying to use voluntary donations to fund the Diamer-Bhasha dam, whose cost has been given as Rs1.450 trillion. This figure is taken from a briefing given by water and power officials at a hearing of the Senate Standing Committee on Planning, Development, and Reform. The cost of reservoir construction was given as Rs650 billion, and the rest for power turbines and associated infrastructure, and land acquisition and resettlement.

Now let’s do some math on this. As of writing, the total amount deposited in this account was Rs32 million. Since the account is shown as being open since July 6, let’s assume only three of those days were functioning; that comes to almost Rs10m per day. Next let’s assume this will pick up the pace since tacit pressure has come to apply on banks to raise funds from their employees (in a meeting held on Tuesday). Exactly how ‘voluntary’ the contributions will be is a separate conversation. For the moment, if we assume that on average, the account sees an inflow of Rs20m per day (which is highly optimistic), then it will take 72,500 days to reach the target or 199 years.

Wait a minute, some people will say. All the money does not need to be available up front in order to begin work! Fair enough. Consider another angle. For next year, the amount allocated for construction of the dam part of the project alone is Rs23.68bn as per the Public Sector Development Programme (PSDP) document on the Planning Commission’s website.

Now do the math. At Rs20m per day, it will take 1,184 days to reach the target of Rs23.68bn, or 3.2 years. Meaning even next year’s PSDP allocation (for the dam part alone) will not be possible to meet the amount.

You can change the assumptions. Let’s say the contributions come in larger than what I have assumed (which, mind you, is generous). Let’s say it’s double the size. That cuts down the period by half, meaning it will take more than a year and a half to reach next year’s target alone.

Let’s say instead that the contributions are not meant to pay for the entire dam, but only to supplement government allocations for the project. Even then, a year’s intake of Rs7.3bn (assuming a Rs20m per day average contribution for the year) will not even be enough to pay for a portion of the resettlement cost of the project.

Public finance is not a joke, the state cannot be run like a charity, and infrastructure finance cannot be crowd-sourced like this. Mind you, the calculations here assume an average contribution rate of Rs20m per day, every day, for years and years on end. How long will the momentum behind this endeavor sustain itself? Weeks? Months?

Before people are asked to contribute their hard-earned money for any cause, they are entitled to ask a few basic questions. What will this money be used for? Who will have the authority to transact these funds? What rules will govern its distribution? How much of an impact will my contribution have?

Perhaps these questions ought to be answered first. For example, will the money from the account be disbursed directly to the point where the costs are coming from, or will it simply be handed to Wapda, the water and power division, or the finance ministry? If it is the former, then let’s take one example. If a technical consultant needs to be retained to advise on what type of cement to use given the extremely large annual temperature variation in the region, and the attendant expansion and contraction that the dam structure will undergo in a typical year making the choice of concrete quite crucial, who will decide which consultant is most suitable for the job? What criteria will be used to make the selection?

There are thousands of such decisions that have to be made in mega projects of this sort. What are the rules of business according to which these funds will be distributed? If the plan is to simply hand them over to Wapda, who will supervise the funds to ensure their proper utilization? How much expertise and experience does that person have in the execution of giant, highly technical projects of this sort?

This is not the first time that a joke has been made out of a very serious matter. After the earthquake of 2005, Pervez Musharraf launched a similar fund called the President’s Relief Fund. Once launched, similar tacit pressure tactics were used to get people to pay up, and one by one various companies lined up saying ‘we are pleased to contribute’, and the amounts were a million here, two million there, until interest dried up and everyone moved on.

Likewise, Nawaz Sharif launched a ‘qarz utaro, mulk sanwaro’ scheme in his second term, in the late 1990s, in an effort to get donations to help pay off Pakistan’s external debt. That too ended in an embarrassing whimper.

A similar scheme by Zulfikar Ali Bhutto in his last year. The television ads asked everyone to contribute one rupee a day, which the ad promised would be used for development purposes. The visual used to illustrate ‘development’ was a cement elevator. And that was also that.

Fact is, modern-day public finances cannot be run in this way, least of all when it comes to infrastructure finance. It’s time to grow up and face the facts: until we fix our water-pricing regime, there is no way out of this crisis.

Check out these Top #5 Essays as well: