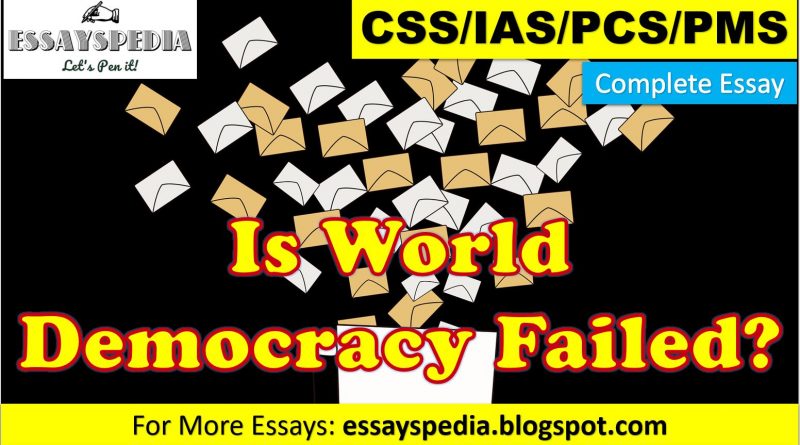 Is World Democracy a Failure?

Democracy is the worst form of government except for all those other forms that have been tried from time to time.

Democracy has been knocked down from the lofty pedestal on which it was ensconced not so long ago as the endpoint of humankind’s search for the ideal form of governance.

This has followed on Donald Trump’s election in the most powerful democracy on earth, Narendra Modi’s in the largest democracy in the world, and Boris Johnson’s is the birthplace of democracy.

How should one reassess democracy in the light of these choices by electorates, choices that would have been considered inconceivable just a decade ago? Keep in mind that one is talking of democracies that pass almost all the tests of qualification — fair elections, rule of law, independent institutions, and civil liberties — although India under Modi is heading in the wrong direction. Authoritarian regimes and illiberal democracies that cloak their rule in democratic garb are excluded from the analysis.

Also to be kept in mind is the fact that doubts about democracy are being taken seriously only when seemingly perverse outcomes have emerged in countries like the US and Britain that had been considered immune to the vagaries of less mature polities.

Reservations about democracy in the latter were voiced in the 1990s, for example, by the late Richard Holbrooke who is reported to have said: “Suppose elections are free and fair and those elected are racists, fascists, separatists — that is the dilemma.” However, such outcomes were attributed to the perversities of ignorant electorates and not to any weaknesses of the democratic system itself.

One defence of democracy would rely on the judgement attributed to Churchill that “democracy is the worst form of government except for all those other forms that have been tried from time to time”. It is better to let people make choices that they have to live with for limited tenures instead of surrendering the decisions to any other agent or body that would be unaccountable for its doings.

Democracy relies on collective wisdom to yield the best of a set of often bad choices. If people opt to elect a Trump or a Modi or a Boris Johnson, one has to live with that choice. Those unhappy with the outcome have room to work within the system to overturn the choices in the next round.

This, however, turns a blind eye to the mounting evidence that the collective wisdom of the electorate is not as neutral and independent as the idealisation of democracy makes it out to be.

Must Check – Essays Based on Proverbs: Proverb Expansions | Proverb Essays

There are ready examples to show that not only can educated electorates be misguided by fake news inside countries but that election can be influenced from outside even in the best of circumstances as alleged in the case of the 2016 elections in the US.

This erosion of the power of the electorate has long been in the making without attracting as much attention as it deserved.

Modern democracy was born in a milieu in which no agent, individual or firm, was large enough to exert undue influence on the choice of others.

This fundamental premise changed with the emergence of mass media and large corporations to the point where many now label the US as a plutocracy rather than a democracy.

The transition from one-person-one-vote to one-dollar-one-vote has had a number of consequences that have derailed democracy from its pristine roots.

Those with the dollars have spent them to influence elections without breaking any laws so that virtually all elected representatives are beholden to the rich.

The representatives, in turn, have helped to lobby for laws and rules favourable to corporate interests. As a result, the wealth of nations has cascaded up instead of trickling down increasing the inequality of income and wealth at unprecedented rates.

The resulting stagnation of living standards of the middle- and lower-income segments of the electorate and the realisation that their dreams for a better future have all but disappeared has led to an unanticipated response from voters.

This response has been abetted by the elite’s dismissive characterisation of the left behind as ‘deplorables’.

In earlier times this kind of a situation might have resulted in a social revolution to eliminate the elite or a socialist turn to level the field. But social revolutions are now ruled out in countries like the US and Britain and yet more promises of an egalitarian future have lost their cachet.

Voters have opted for leaders promising to restore past glory by going after softer targets who they hold responsible for stealing the livelihoods of the marginalised.

One may go back to the plausible observation that democracy, while flawed, is better than any other alternative but the flaws are now so damaging that something needs be done to fix them if potential tragedy is to be avoided.

It is quite conceivable that Trump might lose in 2020, that Boris Johnson might be ousted if the Brexit gamble fails, and that Modi might be consumed by the forces he has unleashed.

But, at the same time, one cannot rule out the possibility that Trump could unleash a global war while in power or that Modi, before he is done, could inflict the kind of damage from which Indians would take decades to recover.

Democracy expects you to vote with your self-interest in mind. The assumption is that if enough people express their self-interest, then the collective wisdom will emerge out of it. One can argue that that is exactly what happened in all three cases. The beauty of democracy is that it can err, but it will self-correct.

What would it take to ensure that mature democracy do not elect the kinds of individuals who can pose real threats to the survival of the world which includes people as well as the natural environment?

An obvious imperative would be a return from the one-dollar-one-vote reality to the one-person-one-vote ideal that was the foundational premise of governance by electoral representation.

However, a corollary to this imperative is what well-wishers and supporters of democracy are not willing to entertain — the fact that doing away with one-dollar-one-vote is impossible without major changes in the virtually unregulated capitalist economic order that now dominates the globe.

Politics and economics are deeply interrelated and it is economic forces that are driving the political dynamic. Restoring liberal democracy without restraining the predatory aspects of capitalism is an attractive proposition for entrenched elites but one that falls short of recognising the reality of our times.

The writer was dean of the school of humanities and social sciences at Lums.

One thought on “Is World Democracy a Failure? | Complete Essay with Outline”