Warning: mysqli_num_fields() expects parameter 1 to be mysqli_result, bool given in /home/techurdu/public_html/wp-includes/class-wpdb.php on line 3574
 How Plastic Is Killing Us And How Far It Has Impacted Us?| Complete FREE Essay With Outline - Tech Urdu
Skip to content 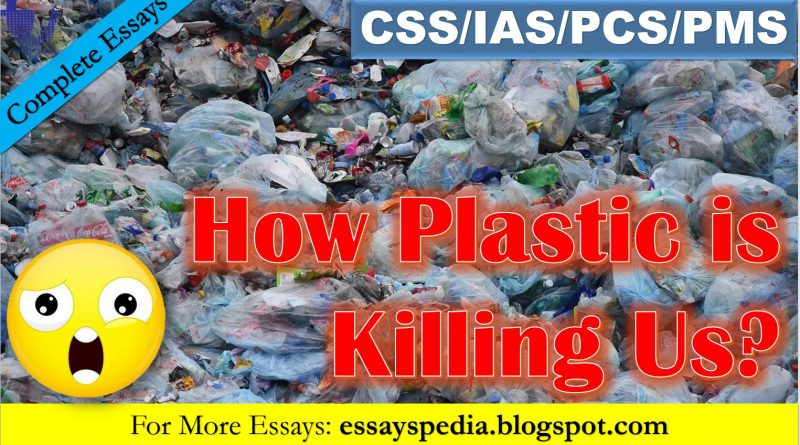 Of all the plastic produced between 1950 and 2015, only nine per cent has been recycled!

When Leo Hendrik Baekeland invented the first fully synthetic plastic in 1907, he probably didn’t realise the impact his invention was going to have on the planet and its inhabitants. Plastic has changed the way we live, buy and consume.

Plastic is unavoidable for us today. It is found in literally everything we use; our vehicles, electronic goods, furniture; even our clothes, food and dental sealants! However, the irony is that what was created for its strength and durability is now mostly preferred for its convenience and disposability.

In the span of a little more than 100 years, we have created and disposed enough synthetic plastic for it to have become a part of earth’s layer itself and be called ‘techno fossil’ according to Dr Ceri Lewis from the University of Exeter.

As per the United Nations Environment Programme (UNEP), the world produces around 450 million tonnes of plastic every year; 40 per cent of which is disposed of after single use.

According to the National Geographic Society, 18 billion pounds of plastic waste flows into the ocean every year, not counting nanoparticles and microbeads.

In fact, we are soon approaching a time where plastic will outnumber marine life itself. A staggering 180 million tonnes of plastic trash comes from single-use items such as shopping bags, straws, cutlery, bottles and packaging.

Plastic takes anywhere from 100 to 1,000 years to break down into the earth’s structure and yet we continue to consume recklessly with complete disregard to our planet’s eco-balance.

Of all the plastic produced between 1950 and 2015, only nine per cent has been recycled! The rest is being burned, releasing toxic fumes as a result, or dumped in the oceans or in landfills, and comes back to us like bad karma.

Pakistan is not among the top plastic waste-producing countries such as China, Indonesia, Philippines and Vietnam. However, owing to rapid urbanisation, a booming population and an increase in consumerism, we are dumping an alarming amount of plastic waste into our land and rivers leading to the Arabian Sea.

A conservative estimate by the Environmental Protection Agency suggests that around 55 billion disposable plastic bags are used by Pakistanis in a year. This does not account for single-use cutlery, crockery and packaging material.

The lack of data and research on the consumption and wastage patterns of single-use plastic in Pakistan is a question. People like Bushra Ahmed Rizvi, a senior volunteer at the Citizens for a Cleaner Karachi, have been engaged in awareness and advocacy for some years now. She feels that the lack of data for serious research and policy planning shows that the issue is not even on the radar of the government and circles concerned.

Ironically, this area has not been a priority for either the governments or the people at large. However, there seems to be some light at the end of the tunnel.

Owing to the increasing amounts of this almost-immortal debris, we’ve ended up choking our waterways, contaminating ecological habitats and killing precious marine life. What makes the situation even more precarious is that, since plastic takes hundreds of years to biodegrade, it keeps breaking down into smaller particles which we call microplastics. This microplastic is now entering our bodies through the water, food and even the salt we consume.

Some of the best practices from around the world — be it developed countries such as the UK or developing ones such as Bangladesh and Rwanda — have been due to stringent policies by the government. For instance, in the UK last year, heavy taxes were imposed on plastic packaging with less than 30 per cent recyclable polymers. In Rwanda, carrying a plastic bag can land you in jail with a heavy fine. People coming into Rwanda have to leave all plastic bags at the immigration.

An estimated 300,000 people are employed in this sector in Sindh, including Karachi, while the national figure is beyond one million. The government would need to look at the numbers before implementing the ban to avoid economic losses and grievances.

An overlooked issue is the sale of plastic bags according to product weight rather than quantity. In the UK, each plastic bag is taxed at five pence by the government and plans are to take it up to 10 pence per bag, whereas in Pakistan, owing to cheap raw materials, plastic bags are not only cheap but also abundantly available to retailers in packaging according to weight.

The Fast Moving Consumer Good Companies (FMCGs) are a major source of plastic waste creation with beverage and snack manufacturers topping the list. It is time that these giants step in to take the responsibility of curbing the enormous trash they’re producing for the planet. Among the biggest single-use plastic polluters according to the Greenpeace are food and beverage giants. Owing to increased environmental activism internationally, they have been forced to pledge recyclable, reusable or biodegradable packaging by 2030.

Similar activism is needed in Pakistan to get companies like these to reduce their plastic waste with innovative techniques, such as the milkman’s model being planned abroad where companies will refill product containers such as shampoos and detergents rather than produce more plastic packaging. There needs to be a bigger commitment and action from them than corporate social activities which, in fact, drive up sales.

Hina Faheem Siddiqui, a physicist with a keen interest in the environment, quotes how setting up eco-industrial estates, which primarily rely on a loop of RRR (Reduce, Reuse, Recycle), can help to reduce plastic waste. These industrial set-ups, such as those in the Scandinavian countries as well as in Canada, South Korea and even India, are planned in a way to use the waste of one industry to power the other — for instance, using single-use plastic as fodder for the pharmaceutical industry after putting it through treatment corrective procedures.

With CPEC and other foreign investment expected, this is the perfect time for the government to plan eco-industrial parks because it makes good business sense in addition to helping the environment.

With the present government’s priority towards the environment, one hopes that effective policy and action is taken soon. But we’re running out of time as the environmental clock ticks fast.

Top#8 Environmental Essays Worth Your Time 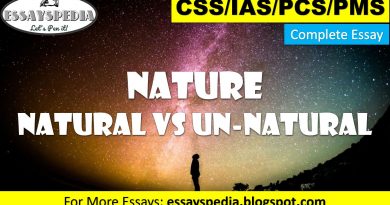 One thought on “How Plastic is Killing Us and How far it has Impacted Us?| Complete FREE Essay with Outline”