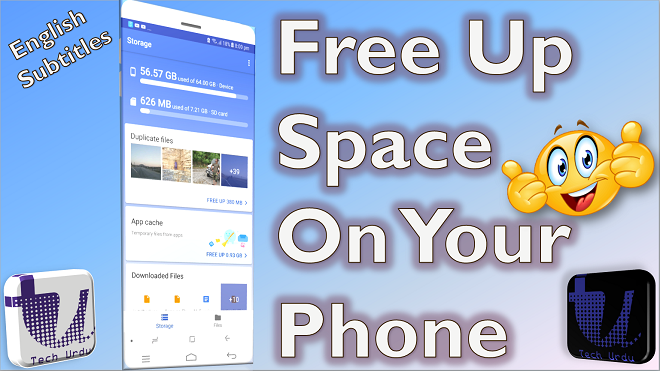 Android/iOS Tips & Tricks Videos on Demand
November 24, 2017December 6, 2019 Naeem Javid 1 Comment best way to increase phone speed and free up space, how to free up space on your phone, the quickest way to organize phone storage data
Spread the love

Why does a phone gets slow each other day? This question comes in mind most of the time. Now there are numerous factors due to which one faces such problem and one of the most important is as we install more Apps and get large junks of data on our phones this reduces the phone speed. Now there are numerous method one can apply to increase storage of phone and increase the speed.

Now you will find a ton of devices these days have built-in cleaners when one checks out these Apps they have more or less the same function and biggest function is to show you Ads – Ops, well it looks like Google has been developing its own. It’s called Files Go

Important Features of Files Go
* Recommends rarely-used apps to remove so your phone stays speedy
* Recognizes and helps you get rid of spam & duplicate images
* Helps you find your important photos, videos, and documents faster
* Makes it easy to share your files offline — quickly and securely

See this: Top 5 ways to Free Up Space on Your Phone

Files Go is designed to help you manage files and clear out free space on your phones by automatically finding apps they aren’t using, plus other storage wasters like duplicate photos which is tiresome job when done manually. But the more interesting portion of the app is the ability to send and receive files from other local Android devices without requiring internet connectivity (similar to Apple’s AirDrop or other Apps like Share it or Zapya etc).

You have already heard of other Google GO Apps like YouTube Go. It would seem that Files Go is part of Google’s Android Go initiative that Google announced at I/O this year, which aims to provide an operating system and apps for smartphones that have less powerful specs and more limited access to cellular data. Apps like YouTube Go, which is also in beta, offer similar features, with local file sharing for downloaded videos.

The Files Go Beta is available now on the Play Store, but Google has yet to say when the final version will be released — or if, like YouTube Go, it will be restricted to specific regions when it is.

In This video you’ll see the detailed Review of File Go App in Urdu/Hind (with English Subtitles):