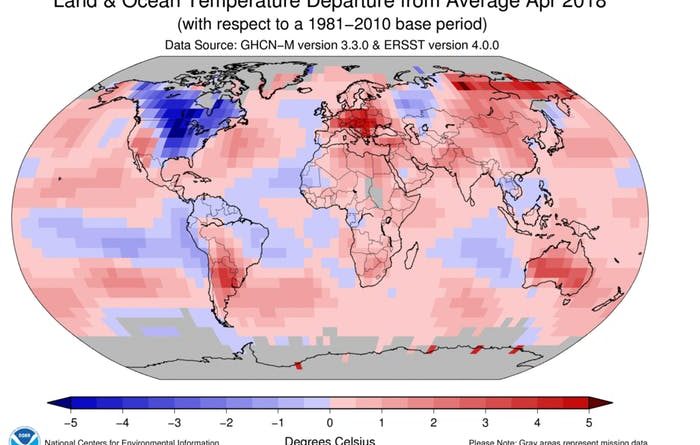 April 2018 was the 400th “consecutive month with above-average temperatures” on Earth, according to the National Oceanic and Atmospheric Administration (NOAA). To clarify, that means December 1984 was the last month the planet had below-average temperatures. It also means we’re headed towards a climate change of 2 degrees Celsius, a number that will have devastating effects on the Earth’s biodiversity.

Not only has Earth reached the milestone of 400 consecutive months of heating up, but last April happened to be the third-warmest April ever recorded globally, according to the NOAA report released Thursday. 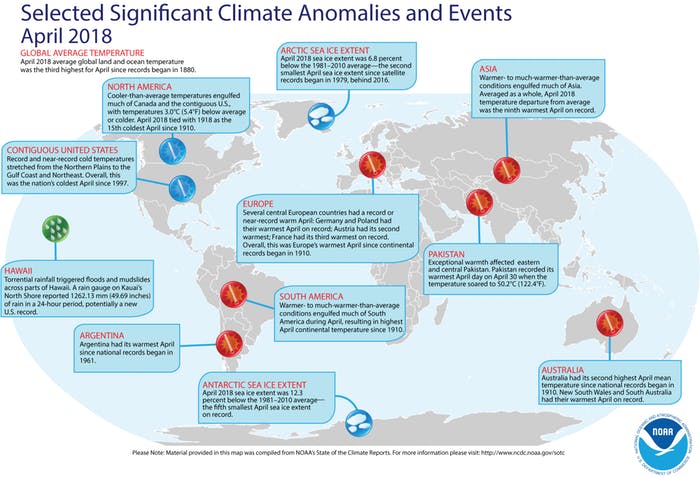 That number isn’t arbitrary. Limiting global warming to just 1.5 Celsius above pre-industrial temperatures would limit the carnage that climate change has on the Earth’s biodiversity. A new study published in Science on Friday found that keeping global warming under 1.5 degrees Celsius would preserve tens of thousands of land-based species of plants, vertebrates, and insects living on the planet.

Led by Rachel Warren, Ph.D., of the Tyndall Centre for Climate Change Research, the study used a combination of climate simulations and data on more than 115,000 terrestrial species worldwide to observe how much warming each species could sustain. Warren found that if the planet were to experience warming of 2 degrees Celsius by 2100, 18 percent of insect species, 16 percent of plant species, and 8 percent of vertebrate species would see their geographic ranges shrink by more than half. However, under just 1.5 degrees Celsius of warming, those numbers fell to 6 percent of insects, 8 percent of plants, and 4 percent of vertebrates.

The 195 countries that are still part of the Paris Agreement have committed to limiting global warming to “well below” the magic number of 2 degrees Celsius. However, scientific literature included in those accords contained few details about the effects of exceeding 2 degrees. With new data available, the United Nations Intergovernmental Panel on Climate Change is expected to convene in late 2018 to finalize a special report on the impacts of 1.5 degrees Celsius of warming.

However, even if all countries adhering to the Paris Agreement meet their targets, without full cooperation in lowering greenhouse gas emissions, some projections estimate global temperatures could still rise by more than 3 degrees or 4 degrees Celsius by 2100. Given the 400-month warming streak, it’s clear that the rate at which the planet warms to 2 degrees Celsius isn’t slowing down.