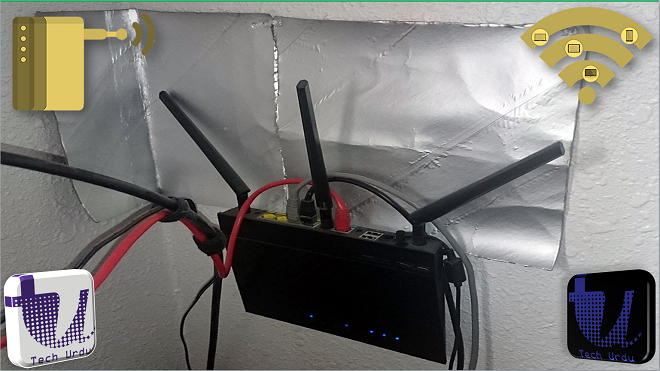 You must have heard of the simple and low-cost method for boosting the coverage strength of Wi-Fi signals inside your home using reflectors out of Aluminum foil used as a ‘virtual wall’ positioned behind Wi-Fi router that can help you redirect WiFi signals to blind spots in your house.

The researchers wanted to investigate if there was a way of using the same idea to more optimally direct wireless signals from a router. So far what they have found is really interesting and amazing.

Since the layout of everybody’s home is different, just putting up a can shaped and hoping for the best isn’t very scientific – it doesn’t give you much control over where the aluminum directs the wireless signals.

EurekAlert reported that researchers, particularly Xia Zhou, an assistant professor of computer science at Dartmouth College, shared a research presentation in the Netherlands on Wednesday, Nov. 9, explaining how a customized reflector wrapped around a router’s antennas can direct signals where they’re most needed. It was also discovered that 3D printed signal reflectors, consisting of a thin layer of metal and plastic, can considerably and cheaply (as directional antenna are costly) improve the wireless signal around a home.

A number of experiments were conducted which were based off the idea of using an aluminum soda can behind a router in order to direct the signal away from deadening walls and other obstacles. At the end, the team was able to analyze a space and create a custom reflector that would optimize the WiFi signal in that room. They then fed their data into a custom program called WiPrint that designed an optimal plastic reflector and created it using a 3D printer which can then be 3D-printed in plastic, and covered in aluminum foil. Here is the demonstration video.

The best part, the whole process only takes about 23 minutes to generate a functional reflector model, and the only costs involved relate to then getting the frame 3D-printed. Now by this method you may not expand the coverage area of your router, but it will ensure that you’ll get stronger signal in the areas you need it most.

While we don’t have access to the researchers’ algorithm for calculating the optimal shape for Wi-Fi reflectors based on our home layout or get it printed by a 3D printer, there’s nothing to stop you having a play around with your own aluminum backing to see if you can improve your router’s reach.

Of course, most of us probably aren’t too concerned about weakening our Wi-Fi, but maybe we should be: having your signal leak outside your home could potentially enable malicious hackers to try to eavesdrop on (or control) your network, although the risks are probably pretty low.

Based on above methodology, according to Xia Zhou, it has been figured out that using a similar technique can actually even make a WiFi network more secure by preventing outside attackers from hooking into the network.

Basically, Aluminum foil reflects WiFi signals, so if a router is placed near the wall, the foil reflects the signals away from the wall. Plus, it creates a barrier that prevents attack vectors from outside, making it more secure as well.